Cars
Campervans
Loading...
Compare Deals to Find A Cheap Car Hire at Bristol Airport
Download the VroomVroomVroom app and access the best car hire deals wherever you are. 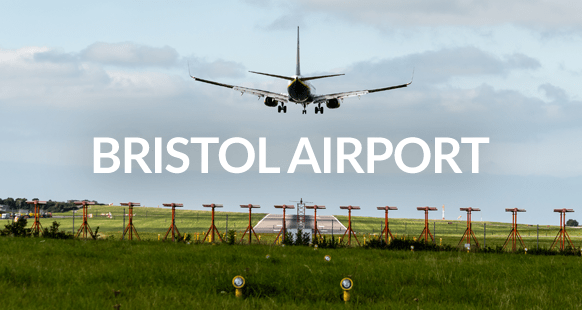 You can easily hire a car at Bristol Airport through VroomVroomVroom. We compare deals from leading car rental companies including Avis, Alamo, Budget, Hertz, Enterprise, Europcar, and Green Motion. Just some friendly advice. You may want to book early in order to increase your chances of getting cheaper rates. If it is your first time to book a car hire in the United Kingdom, you might want to read our rental guide.

On arrival at Bristol Airport, exit the arrivals hall and proceed to bus stop 3, the bus will travel to and from the Car Rental Village every 10 minutes. The Bus is a shared bus with the Silver Zone Parking and will be signed for car rental and Silver Zone parking. On arrival at the Car Rental Village, enter the building and you'll find Alamo, Enterprise and National in front of you to the left.

Why rent a car at Bristol Airport with VroomVroomVroom

The airport is accessible from the heart of Bristol City via taking M5 to reach A4 that is connected to A38 where the airport is situated, and how much easier it will be with your very own hire car with VroomVroomVroom. Click here for more driving tips in the UK.

Regarded for its balloon festivals, it is a place to behold so if you are planning a trip to Bristol, why not try and coincide it with the Bristol Balloon Festival? We assure you won't be disappointed. Truth is, the city never runs out of festivals and parties to celebrate. For a list of activities and attractions, check out VromVroomVroom's recommendation below. 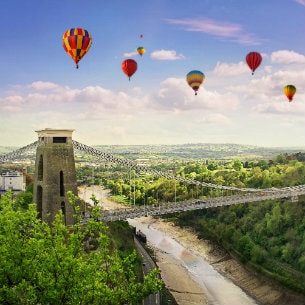 This colourful festival is held annually during the month of august in Bristol, England. Several hot air balloons gather in one venue and mass ascend at the same time. Mass ascending takes place twice a day 06:00 a.m. and 06:00 p.m. pending on weather condition.

It was founded sometime in 1823. It is a large art gallery and museum of local and world history. The establishment is located at Clifton and welcomes visitors free of charge.

The origins of the city lie in the abbey founded in 1140 by Robert FitzHarding, a wealthy merchant, Provost of Bristol and Lord of Berkeley. FitzHarding brought Augustinian monks to serve God and the community here from the walled city. Their abbey church was dedicated to St Augustine the Great.

The zoo features and takes care of a number of wildlife (including endangered species) under its wing since 1836. Exploring the zoo is not only fun but also noble as its proceeds are for the conservation of the animals from within and outside the institution. Its exhibits include the Seal and Penguin Coasts, Explorers' Creek, Gorilla Island, Reptile House, Aquarium, Bug World, Zona Brazil, Monkey Jungle and Monkey Islands, Butterfly House and ZooRopia.

This landmark is a Grade II listed tower that was founded sometime in between 1896 and 1898. It is located within the Brandon Hill, Bristol. The tower has a spiral staircase and viewing platforms made great to see most parts of the city.

The museum represents the initial serious attempt in the United Kingdom to present a publicly accessible history of the British empire and to examine its continuing impact on Britain and the rest of the world.